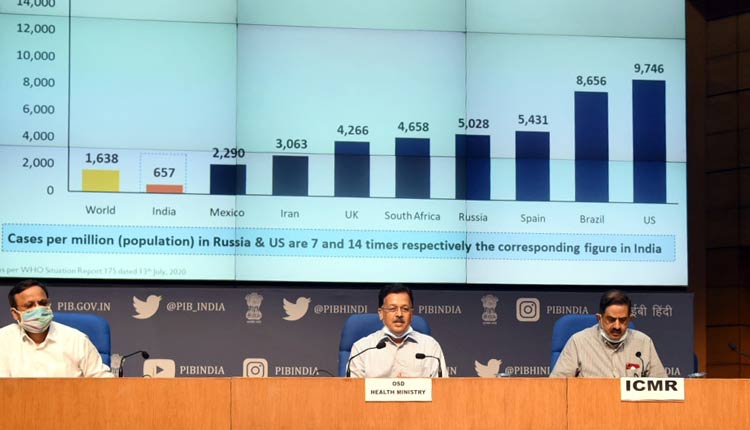 New Delhi: The Union Health Ministry on Thursday said that herd immunity cannot be a strategic option in a nation the size of India and this can only be achieved through immunisation in the future.

Addressing a press conference, Health Secretary Rajesh Bhushan said: “Herd immunity is an indirect protection from a disease. In a country the size of India, it cannot be a strategic choice or option. It can only be achieved through immunisation but that is in the future.”

He said that the ministry, too, believes that the herd immunity is far in the future and hence, ir is important to adopt Covid appropriate behaviour. The remarks came at a time India has logged over 15 lakh coronavirus cases and continues to have the fastest growth rate of infection.

The Ministry again reiterated that there is no community spread in the country, and that there are merely clusters of cases and pockets of localised transmission.

Bhushan said that as many as one million people have recovered till now and the recovery rate is increasing. “In April first week, the rate of recovery was 7.85 per cent, in June, it increased to 48.31 per cent and 64.44 per cent in July. Recoveries are 1.9 times the number of active cases.”

As many as 16 states and UTs have a recovery rate more than the national average of 64.44 per cent. The highest number of recovered patients are in Delhi, Ladakh, Haryana, Assam, Telangana, Tamil Nadu and Gujarat.

Besides this, there is a decrease in the percentage of active cases and deaths due to Covid-19, the Health Secretary said, adding that effective clinical management has led to the decrease in case fatality rate. “In June, it was 3.33 per cent and now it is 2.21 per cent and is continuously decreasing.”

As many as 24 states and UTs have a lower case fatality rate than the national average. Out of this, eight states – Assam, Kerala, Odisha, Chhattisgarh, Himachal Pradesh, Bihar, Goa and Jharkhand have less than one percent rate.

Bhushan said that testing infrastructure has also increased and almost one crore tests were conducted in the span of the last one month. “In July first week, cumulative numbers were 88 lakh and now 1,81,90,382 tests have been done.”

Meanwhile, there are 21 states where positivity rate, or the percentage of people who test positive compared to the overall number tested, is less than 10 per cent.

Out of the total, four states and UTs — Rajasthan, Punjab, Madhya Pradesh and Jammu and Kashmir have rate less than 5 per cent, while Andhra Pradesh, Maharashtra, Puducherry, Odisha and Karnataka have more than 10 per cent positivity rate.

“Three are in phase three clinical trials – in the US, the UK, China. In India, phase 1 and phase 2 clinical trial of two indigenously-developed vaccines have commenced. One trial is being conducted on 1,150 subjects at eight sites. The other is being tested on 1,000 subjects at 5 sites.”

He further said that India has not signed any agreement with any vaccine manufacturing company. “We have had discussions on vaccine distribution. There are various stakeholders within government and outside and the ministry has started actively engaging with them.”

He said that whenever the Covid-19 vaccine will come, it will be administered on a much larger scale compared to the existing vaccines. “This is something on which there is near unanimity,” the Health Secretary said.

Herd Immunity Against COVID-19 In India May Generate Only In Pockets, Can Be Short-Lived