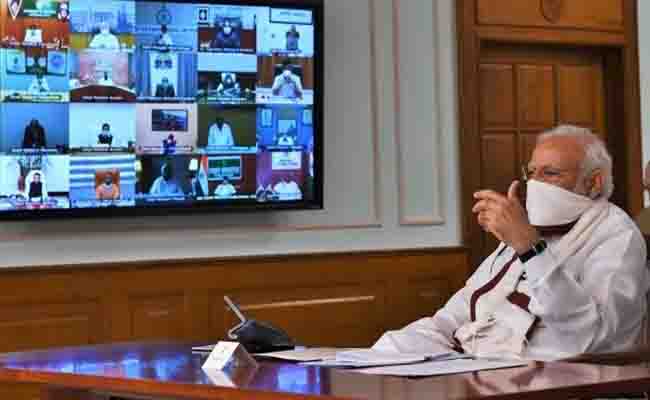 New Delhi: The COVID-19 nationwide lockdown is set to be extended at least till April 30 after a broad “consensus” on it emerged on Saturday during a meeting of chief ministers with Prime Minister Narendra Modi, who stressed on “jaan bhi, jahaan bhi”, indicating that restrictions may be tweaked as it was important to save livelihoods along with lives.

According to sources, all central ministers have also been asked to resume work in ministries from Monday and put together plans for post-lockdown period to kick-start the economy.

India has witnessed a sudden spike in the coronavirus infections with 1,035 fresh COVID-19 cases and 40 deaths due to the disease being reported in the last 24 hours across the country, which is under a 21-day nationwide lockdown since March 25.

The current spell of the lockdown, billed as the world’s largest shutdown to check the spread of the infection, ends on Tuesday even as the Union health ministry asserted that the tally of confirmed cases could have reached 8.2 lakh by April 15 in the absence of the lockdown and other containment measures.

In the interaction held via video conferencing, most of the chief ministers suggested that the nationwide lockdown should be extended by two more weeks, an official statement said.

Emphasising the criticality of coming 3-4 weeks for determining the impact of the steps taken till now to contain the virus, Modi told the chief ministers that “teamwork is the key to facing the challenge”.

It said Modi also underlined that the motto of the government earlier was ‘jaan hai to jahaan hai’ (the world exists if life exists) but now it is ‘jaan bhi jahaan bhi’ (lives as well as livelihoods). According to sources, the government is focusing on hotspots of COVID-19 to contain the spread of the pandemic and on efforts to kick-start the economy once the lockdown is lifted.

Though the government did not directly announce its decision on the lockdown extension, Delhi Chief Minister Arvind Kejriwal after the meeting tweeted “PM has taken correct decision to extend lockdown. Today, India’s position is better than many developed countries because we started lockdown early. If it is stopped now, all gains would be lost. To consolidate, it is imp to extend it.”

There were also indications that the extension in lockdown may come with certain relaxations to boost economic activities with sources saying that there were various proposals being considered, including lesser restrictions in areas unaffected by the virus spread.

The government officials said guidelines for the second phase of lockdown would be announced in next few days, even as Yediyurappa, after the interaction, said the extended lockdown period of two weeks would be different from the current 21-day spell.

The official statement also referred to the prime minister’s comments on the challenges on the economic front.

Asserting that the crisis is an opportunity to make India self-reliant and turn the nation into an economic powerhouse, Modi talked about strengthening healthcare infrastructure and reaching out to patients through tele-medicine.

“Talking about the Exit Plan from lockdown, the prime minister said that there seems to be a consensus amongst the states on extension of lockdown by another two weeks,” it said.

Meanwhile, the Chief Minister of Maharashtra, which has the highest number of COVID-19 cases in the country with over 1,600 and at least 110 deaths, announced the extension in the lockdown in the state till April 30, adding restrictions can be relaxed in certain areas. Punjab and Odisha have already announced extending the lockdown beyond April 14 .

The meeting was called by Modi to discuss the situation arising due to the COVID-19 pandemic and to take feedback of chief ministers on whether the 21-day shutdown should be extended.

During the interaction, Modi observed that the combined efforts of the Centre and the states have definitely helped reduce the impact of COVID-19 but since the situation is rapidly evolving, constant vigilance is paramount.

Modi also categorically assured that India has adequate supplies of essential medicines, and said that measures are being taken to ensure availability of protective gear and critical equipment for all front-line workers.

He also gave a stern message against black marketing and hoarding.

Puducherry Chief Minister V Narayanasamy said the chief ministers of several states sought a financial package from the Centre as they were facing a fund crunch in the absence of any economic activity due to the ongoing lockdown.

Punjab Chief Minister Amrinder Singh said he reiterated the need for health cover for all the employees as well as assistance to daily wagers while Chhattisgarh Chief Minister Bhupesh Baghel urged Modi to permit states to carry out economic activities within their borders.

Modi was accompanied by some senior officials, including from the Union health ministry, during the meeting, which was also attended by chief ministers — Yogi Adityanath (Uttar Pradesh), Manohar Lal (Haryana), K Chandrashekhar Rao (Telangana) and Nitish kumar (Bihar).

The Union Home Ministry has sought views of state governments on various aspects, including whether more categories of people and services need to be exempted. In the current lockdown only essential services are exempted.

This is for the second time the prime minister interacted with the chief ministers via video link after the lockdown was imposed. The last such interaction was on April 2.

Before the lockdown was announced on March 24, the prime minister had interacted with the chief ministers on March 20 to discuss ways and means to check the spread of the novel coronavirus.