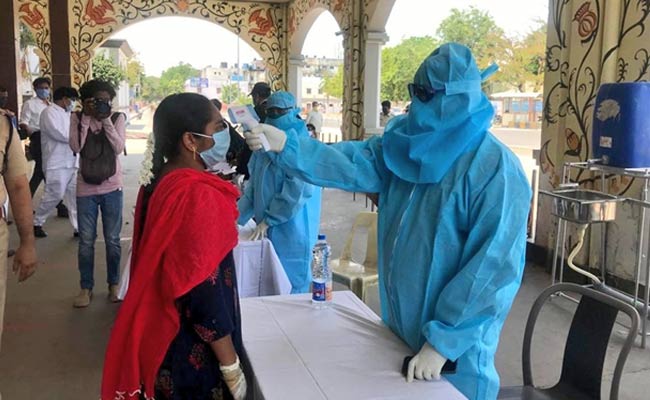 New Delhi: As Lockdown-4 brought in easing of restrictions across the country, India crossed the 1.25 lakh mark coronavirus cases with the total number rising to 1,25,101, the Union Health Ministry data revealed on Saturday.

Of the 137 deaths reported since Friday morning, 63 were in Maharashtra, 29 in Gujarat, 14 each from Delhi and Uttar Pradesh, six from West Bengal, four from Tamil Nadu, two each from Rajasthan, Madhya Pradesh and Andhra Pradesh, and one from Haryana.

The number of deaths due to the contagion in Rajasthan is 153, while 152 people died in Uttar Pradesh, 98 in Tamil Nadu and 55 in Andhra Pradesh.

Seven people have succumbed to the disease in Odisha, and four each in Kerala and Assam so far.

Jharkhand, Chandigarh and Himachal Pradesh each have recorded three deaths each, while there is a fatality each in Meghalaya and Uttarakhand, the ministry said.

More than 70 percent of the deaths are due to comorbidities, according to the ministry website.

In Haryana , 1,067 people are afflicted with the deadly disease, while Kerala has 732 cases, followed by Jharkhand with 308 and 259 in Assam. Chandigarh has reported 218 cases, while 175 people have tested positive in Tripura and 172 Chhattisgarh.

There are 168 cases of the pathogen in Himachal Pradesh, 153 in Uttarakhand and 54 in Goa. Ladakh has reported 44 COVID-19 cases, while Andaman and Nicobar Islands has registered 33 infections.

Manipur and Puducherry have registered 26 cases each, followed by Meghalaya with 14. Mizoram, Arunachal Pradesh, and Dadar and Nagar Haveli have reported a case each so far.

“1,899 cases are being reassigned to states,” the ministry said on its website adding: “Our figures are being reconciled with the ICMR.” Statewide distribution is subject to further verification and reconciliation, it said.

Central Govt Staff To Have Staggered Timings, No Biometric Attendance

COVID-19 Treatment: ICMR Issues Revised Advisory On Use Of Hydroxychloroquine