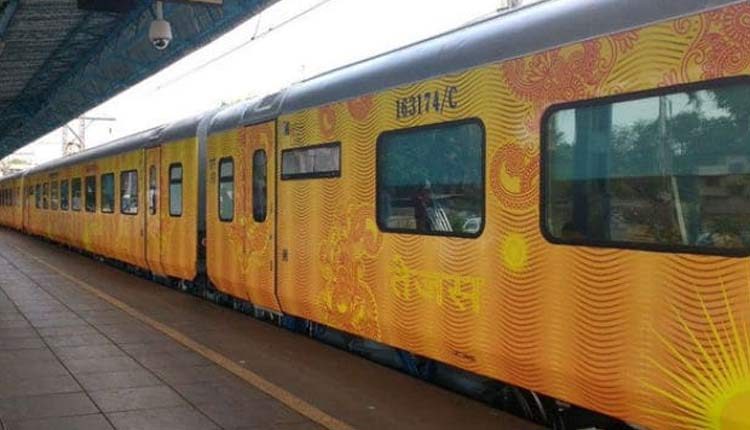 Lucknow: The first train, operated by private players, to be run between Lucknow and Delhi will be the Tejas Express.

The Railway Board is deliberating on a second such route, which too would be within the 500-km range.

The Railways, despite protests from its unions, is going ahead with its 100-day agenda of handing over operations of two of its trains to the private sector.

The Delhi-Lucknow Tejas Express was announced in 2016 and has been recently introduced in the new time table.

On the return journey, (train number 12586) it will leave from New Delhi at 3.35 p.m. to arrive in Lucknow Junction at 10.05 p.m. The train will run on all days of the week except Sunday and Thursday.

The train is currently parked at Anand Nagar Railway station and will be handed over to private players after an open-bidding process for operating it.

The custody of the trains will be transferred to the Indian Railway Catering and Tourism Corporation (IRCTC), which will pay for it, including their lease charges, to the financing arm, IRFC.

A railway official said, “These two trains will be given on an experimental basis and will start running within 100 days. We have been trying to identify routes that have high congestion and connect important tourist spots. The route for the second train will also be identified soon.

The seats will have an orange and yellow colour scheme that will match the exteriors of the train. It will also have Anti-graffiti vinyl wrapping and a swanky mini pantry. The gangways will be dust-sealed and automatic connecting doors as well as entry and exit doors will be the other features of the train.

At present, the Lucknow-Delhi route is served by 53 trains including the Swarn Shatabdi. The Uttar Pradesh capital, however, does not have a Rajdhani.

The proposal of the Railway Board in its 100-day plan was to offer two trains to operators who would be willing to be part of the bidding process for rights to run private passenger day/overnight train sets connecting important cities.

The proposal, however, has come under severe criticism from the railway unions, who have threatened large scale protests over the issue.

BREAKING! 70 Lakh Youths To Get Jobs In India Soon