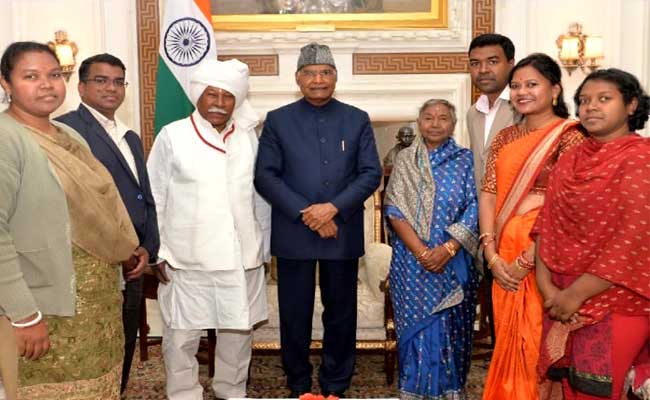 Bhubaneswar: It was in December 2019 when the entire country came to know about the friendship and bond between two old friends- President Ram Nath Kovind and Birabhadra Singh, former Rajya Sabha MP from Odisha.

It was during the short meeting on the sidelines of Platinum Jubilee Celebrations of Utkal University in Bhubaneswar that President had invited Singh to Rashtrapati Bhawan. President Kovind kept his word and played host to Singh and family who visited the Rashtrapati Bhawan in New Delhi on February 4, 2020.

Singh’s happiness knew no boundaries when he narrated his feelings to media persons here in Bhubaneswar about his recent meeting with Kovind which lasted over 30 minutes.

Recalling the moments of his meeting, Singh said President Kovind told my children that “I know your father and recognised him from his ‘Pagdi’ in Vani Vihar. I knew him (Singh) by heart since the time we were together.”

It is pertinent to mention here that Birabhadra Singh and President Kovind were Rajya Sabha Members from 2001 to 2005. It was during the valedictory session of Utkal University platinum jubilee celebrations in December last year that the President met Singh after 12 years.

Though Singh then had expressed his desire to meet Kovind much before his arrival and approached the President’s security officers to allow him to offer a rose, his request was turned down due to security reasons.

However, Singh’s dream came true when President himself recognised him sitting in the audience and immediately asked his officers to arrange a meeting.
“I told him that his decision to meet me was appreciated by media which termed the friendship to be that of ‘Krishna and Sudama’,” said Singh.

Singh further informed that he also discussed a lot of things including the history and future of Mayurbhanj which first had merged with India and then with Odisha.