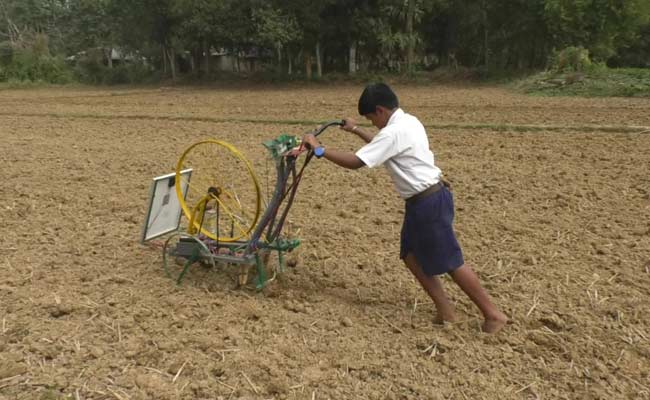 Balasore: A 12-year-old boy of Odisha has been invited to attend a tea party to be hosted by the President of India Ram Nath Kovind in New Delhi for inventing solar-run farming equipment which will be effective in reducing labour burden and save time in farm works.

Biplab Kumar Ghosh of Madhupara hamlet in Basta block of the district has recieved the coveted invitation from the President’s office for his amazing innovation.

A Class VII student of Upendra Nath Nodal Upper Primary School, Biplab used to see his father working in fields all through the day under the scorching heat of the sun and the painful scene sparked an urge in him to help his father. His creativity took shape when he made up his mind to create a machine that will help his father in farming.

“I am a farmer’s son and know that agriculture demands hard labour and is also time-intensive. When I saw my father toil hard in the field and also pay others to work for us when he is not able to, I thought of helping him and decided to make a machine which will save time, reduce labour and cut down other expenses as well,” Biplab said while narrating about his journey on how he came up with an idea to create the machine.

Biplab took the help of his teachers and some classmates to come up with an innovative multi-tasking solar-run machine by spending Rs 10,000.

“The machine can do six different works simultaneously which includes preparation of land before sowing seeds, ploughing, sprinkling water and pesticides, sowing seeds and applying manure,” Biplab said while speaking about the functioning of the machine.

The unique farming instrument has now won him many district, state level and national recognition. He was was recently felicitated with the INSPIRE Awards – MANAK (Million Minds Augmenting National Aspirations and Knowledge).

Chinmay Kumar Nanda, Headmaster-in-Charge of Biplab’s school said, “The ‘Seed And Fertilizer Applicator’ by him was among the 7 projects that were selected for INSPIRE Awards – MANAK. The machine will run with solar energy and will be effecting in saving expenses in agriculture as well as conserve time.”

Taking note of his innovation, the President’s office has also invited him to attend a tea party in Delhi. Though the exact date of the event is yet to be fixed, the tea party is scheduled to be held in March-April.

It may be mentioned that the Innovation in Science Pursuit for Inspired Research (INSPIRE) scheme is one of the flagship programme of Department of Science & Technology (DST). The scheme aims to motivate students in the age group of 10-15 years and studying in classes 6 to 10.