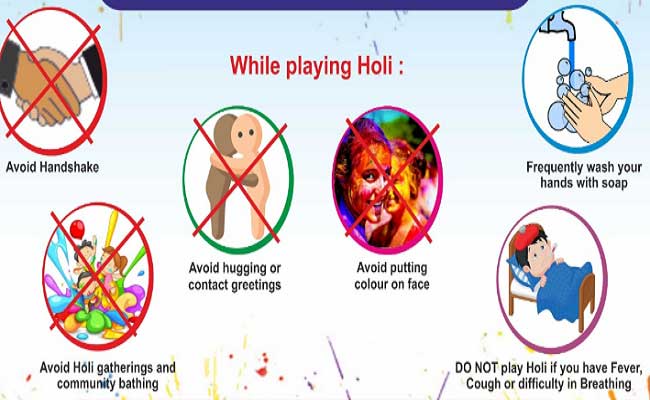 Bhubaneswar: As a precautionary measure amid Coronavirus outbreak, the Odisha Health Department has issued advisory for Holi celebrations tomorrow.

Follow the following advisory to keep yourself and your loved ones safe during Holi.
Wishing you all a very #HappyHoli. 2/2 pic.twitter.com/bZGUFkxpCx

On the other hand, Commissionerate Police has made elaborate arrangements to ensure safety of people during the celebrations.

As many as 16 platoons of force will be deployed across Bhubaneswar, 17 PCR vans will be on patrolling duty and routine checking of vehicles will be done at 28 places. Bhubaneswar DCP Anup Sahu has said that those resorting to drunken and rash driving will be penalised.

“Extensive security arrangements will be done for Holi celebrations tomorrow. Checkpoints will be set up at 28 places and strike force will also be deployed to avoid any untoward incident. We are requesting everyone to play Holi safely,” said Sahu.

Urging everyone to take precaution during Holi celebrations, State Health Secretary Nikunja Dhal said, “Since coronavirus spreads through droplets, I urge everyone to not organise large gatherings or community lunch. Those suffering from cold, cough and fever shouldn’t participate in the celebrations,” said Dhal.