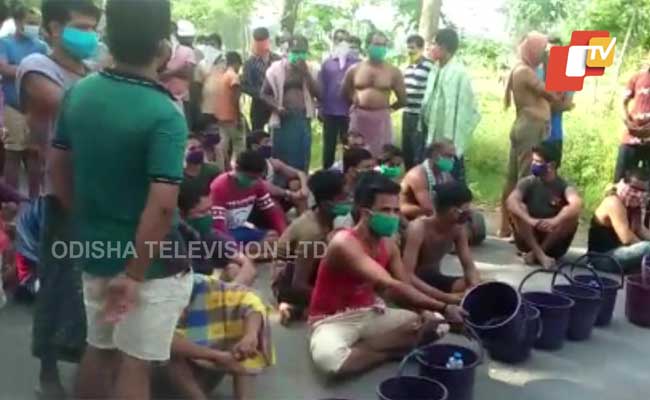 Bhadrak/Berhampur: Despite returning to the native State after weeks of hardships amid the nationwide lockdown in the wake of Coronavirus outbreak, it seems the tragedy hitting the returning migrants in Odisha is far from over.

Already reeling under the crisis of losing their livelihood due to the lockdown, absence of basic facilities in the temporary medical camps have now made their lives more miserable as they continue to spend their days of quarantine period as per Covid protocols.

Some quarantinees lodged at a temporary medical camp in Binayakpur village under Basudevpur block of Bhadrak district have opened up about their ordeal they are currently going through with lack of essential facilities at the quarantine centre. The plight of the migrants came to fore after a video showing them ruing absence of the facilities was found doing rounds on social media.

As per reports, 9 migrants including two children had returned from Maharashtra on May 19 and were kept at the quarantine centre with all assurances of necessary provision of basic facilities and healthcare. However, the migrants alleged that there are only five beds in the quarantine centre. Apart from the lack of electricity at the camp, they also alleged that absence of drinking water facilities has been giving them a tough time.

Asked about the situation, nodal officer of the quarantine camp accepted about the shortage of beds in the centre.

“There are five beds in the quarantine centre. As the migrants reached Binayakpur village on the evening of May 19, we could not arrange the rest of beds due to cyclone Amphan,” said Nodal Officer, Kanhu Rana.

Similar is the situation of the inmates at a quarantine centre in Semelmunda village under Muribahal block of Bolangir district. The migrants lodged at the camp refused to have breakfast alleging poor food quality.

Not only these, but social media platforms are also replete with many such incidents pointing at gross mismanagement at TMCs set up by the government for care of the migrants.

One of the most shocking scenes was however reported from Kendrapara district where some women migrants lodged at an ashram school alleged that they are feeling unsafe as they are forced to share common bathroom. Another centre in the district also reportedly lodged returnees which had only one woman and rest male inmates.

Meanwhile, lack of basic facilities triggered unrest in Dharakote area of Ganjam district when around 54 inmates of K Ramchandrapur quarantine centre in the block launched a protest and blocked Aska-Sorada road by placing empty buckets. The migrants alleged that the camp does not have any electricity connection and drinking water supply.