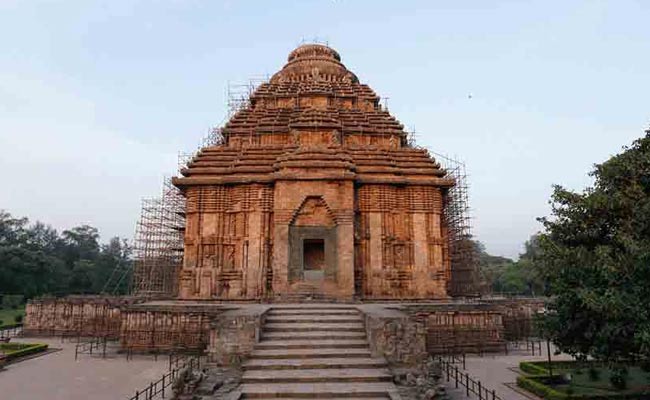 Thank God good sense has finally prevailed! After stubbornly resisting all suggestions by experts for years, the Archeological Survey of India (ASI) has finally relented and agreed to remove the sand from under the Jagamohana of the Sun Temple in Konark, the 13th century architectural marvel.

The first recommendation for removal of sand, from a team of conservation experts, had come as early as 1987. Since then, many experts have advised the removal of the sand to assess the damage to the structure and then initiation of corrective measures to save this magnificent specimen of the Orissan style of temple architecture from ruin. But, for reasons of its own, the ASI had stonewalled all such recommendations – till now. In fact, it was all set to do the exact opposite by refilling the Jagamohana with sand till a few months ago! The decision was taken on the advice of the Central Building Research Institute (CBRI) which, in a report submitted to the ASI last year, had recommended sand refilling on the ground that the existing sand had settled by about 12 feet. Saturday’s decision, announced after a national conference on ‘Conservation of Sun Temple’, thus came as a bit of a surprise.

But whatever the reason for the volte face, the decision is most welcome since refilling the Jagamohana with more sand would have been a regressive step. Sand filling was resorted to by the British between 1901-03 as part the effort to ensure the stability of the structure because that was the only method available during those days. With advancements in restoration technology, it is now possible to save ancient heritage structure from crumbling. Why, it is even possible to relocate a whole structure, stone by stone, and recreate it exactly as it was in its erstwhile place, as has been with the Borobudur temple in Indonesia!

Sand refilling, experts say, would have prolonged the life of the once imposing structure, groaning under the cumulative impact of the vagaries of weather and saline effect for centuries, would have been extended by just about 50-100 years. But with the right kind of conservation strategy, its lifespan can now be prolonged by 500 years or more. If need be, it can be relocated wholesale to another place away from the coast where the saline effect is less. Of course, the sand removal itself is fraught with the risk of bringing down the whole structure if not done with extreme care and precaution and under the watchful eyes of competent conservation experts. But the risk is worth taking because the alternative would just delay the inevitable.

But the big question is if ASI has the wherewithal to undertake such a monumental – and risky – exercise. The fact that much of the damage to the 13th century temple has been done under its watch should answer the question. Exquisitely carved stones have kept falling off the temple walls every now and then even as the ASI has kept twiddling its thumbs. No one knows if the fallen stones have been properly documented, numbered and preserved for possible reuse in future. When there was a controversy on Twitter over the alleged replacement of carved stones with plain stones last month, ASI promptly came out with a rebuttal saying no stone had been replaced – since the 1980s. But it did not bother explaining why the stones keep falling and what it was doing to prevent it. Missing stones in such an architectural masterpiece is certainly not a welcome sight for the visitor/tourist. As the organization in charge of the structure since 1939, the ASI has to take a large share of the blame for the sorry state of the temple.

As for the CBRI, which has been roped in by the ASI for advice on ways to conserve the Sun Temple, conservation experts are near unanimous in their view that it is certainly not the organization which has the required expertise in such things. “Their expertise is in building. Conservation of historical monuments is an altogether different ball game,” they point out.

Having shed its intransigence, the ASI must now go the whole hog and rope in the most competent agency in the world to preserve the Sun Temple. My good friend Sukumar Roy, a Canada based person of Indian origin who has visited almost all heritage sites in Asia and is a veritable storehouse of information on them, is of the view the Japanese are the best when it comes to conserving sites. Cuttack based Anil Dey, who has spent a whole lifetime studying and documenting the Sun Temple, believes the best course would be to entrust the task to the UNESCO, which has an enviable record in conserving heritage sites, including relocating wholesale the Abusimbel temple threatened by flooding due to the Aswan dam. In a way, it would be appropriate to rope in the UNESCO because it was this UN body that conferred the coveted ‘World Heritage Site’ on the Sun Temple, the only entry from Odisha, in 1984. Experts say there are other options available as well.

Let the ASI not stand on ego, consult top conservation experts and entrust the job to an agency based on their recommendation.

(DISCLAIMER: This is an opinion piece. The views expressed are the author’s own and have nothing to do with OTV’s charter or views. OTV does not assume any responsibility or liability for the same)
Archeological Survey of IndiaASIASI on Sun TempleKonarkremove sand from Jagamohana of Sun TempleSun temple
Share FacebookTwitterWhatsAppTelegram