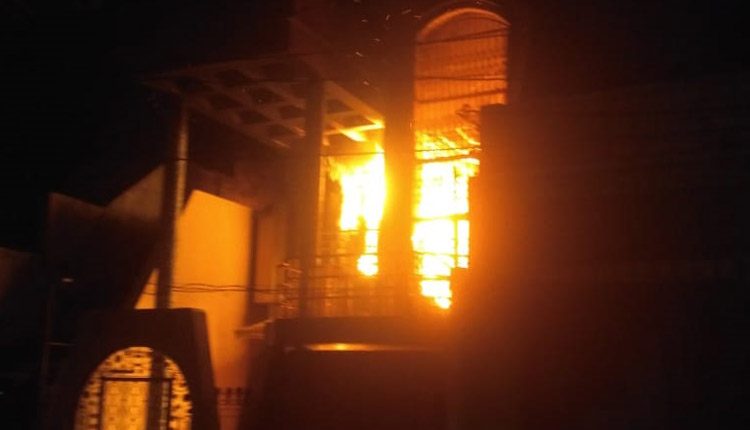 Berhampur: Three persons died of asphyxiation including the President of Berhampur Cooperative Society (BCC) bank, Alekh Choudhury when a major fire broke out at Alekh’s house at Panigrahi Sahi in Goshani Nuagaon last night due to suspected short circuit in electric wires.

As per the initial reports obtained from fire services department, the blaze broke out from a short circuit of the air conditioning unit. Following a distress call by Alekh himself, fire tenders reached to the spot and rescued three persons from the blazing house.

All three of them were rushed to MKCG Medical College and Hospital in critical condition however, the doctors declared all three as brought dead.

Apart from Alekh who was incidentally a strong BJD leader in the area and was elected to the BCC for the three consecutive terms, the two others died in the incident were Bhagaban Patra and Sunil Behera who are stated to be the relatives of Alekh.

As per sources, after informing the fire tenders, Alekh again rushed into the burning house to rescue his other two relatives but probably died due to intense fumes.

Earlier in his political days, Alekh ran for MLA from Aska and Berhampur constituencies with Congress party ticket before finally settling in with BJD which made him win the Presidential post at BCC for three consecutive times.

A pal of gloom descended over Berhampur and MKCG hospital as his well-wishers reached to get a parting glimpse of the leader.

The working President of Congress party in Berhampur said, “Our party condoles the death of Alekh Choudhury. He struggled a lot in his childhood so he made it his mission to help the downtrodden and poor.”

Another associate of Alekh said, “He had a strong character. Even during this fire, he called the fire services first and then went inside the blazing house as a hero to rescue the other two, but couldn’t beat the deadly smoke.”