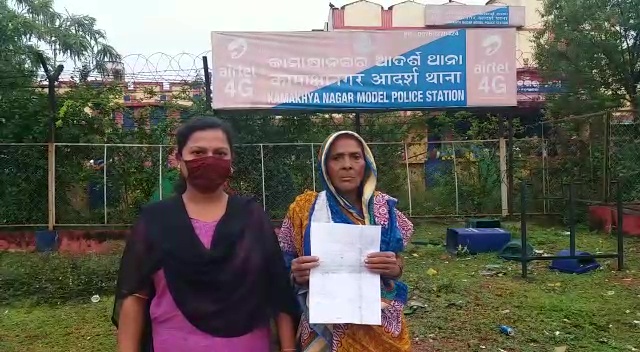 Dhenkanal: An elderly woman has approached the Kamakhyanagar Police Station in Dhenkanal district on Tuesday, complaining of harassment and torture to her and her mentally challenged daughter by elder son and daughter-in-law.

The 70-year-old complainant identified as Rasa Nayak of Jirala village in the district has two sons and two daughters. While Rasa’s elder daughter is married near the village, Rasa along with her younger daughter, who is mentally challenged, was living with her elder son and daughter-in-law.

Rasa in her FIR alleged that her son and his wife have been harassing and physically abusing them. She even alleged that they used to take the pension money that she and her daughter avail under various government schemes.

“They took away the pension money and physically tortured us. They even refused to give us food. I and my younger daughter have been eating at my elder daughter’s house since the last ten days,” stated Rasa.

Meera Baral, Rasa’s granddaughter who accompanied her to the police station alleged, “My uncle is torturing my grandmother and taking away the pension money forcefully. They even quarrel with us when we try to help her (Rasa). My elder aunty also tried to strangulate her once. Strict action should be taken against them.”

However, Rasa’s son and daughter-in-law did not comment on the allegations levelled against them. The Kamakhyanagar Police also could not be reached for comment in connection with the matter.