Banita, a student of the Navodaya Vidyalaya has a keen interest in astrophysics. She became famous after discovering an asteroid in space, which was later validated by the NASA in USA.

Bringing laurels to Odisha and particularly to her hometown Nabarangpur, Banita Dash on Monday received the Pradhan Mantri Rashtriya Bal Prashkar (PMRBP) – 2022 in the category, Innovation.

Banita, a student of the Navodaya Vidyalaya has a keen interest in astrophysics. She became famous after discovering an asteroid in space, which was later validated by the NASA in USA.

Besides astrophysics, she devotes her time to easing out pressure from the students. As per reports, she has designed an automated sanitizing school bag for students. She is an ardent lover of traditional Pattachitras as well, and trying her hands in creating some.

Union Cabinet Minister for Women & Child Development, Smriti Irani, lauded Banita for her achievement. Taking to Twitter, Irani wrote, “Banita Dash from Odisha discovered an asteroid which has been recognized by NASA. She has also designed an automated sanitising school bag for children. She aspires to become a successful astrophysicist and make the Nation proud.” 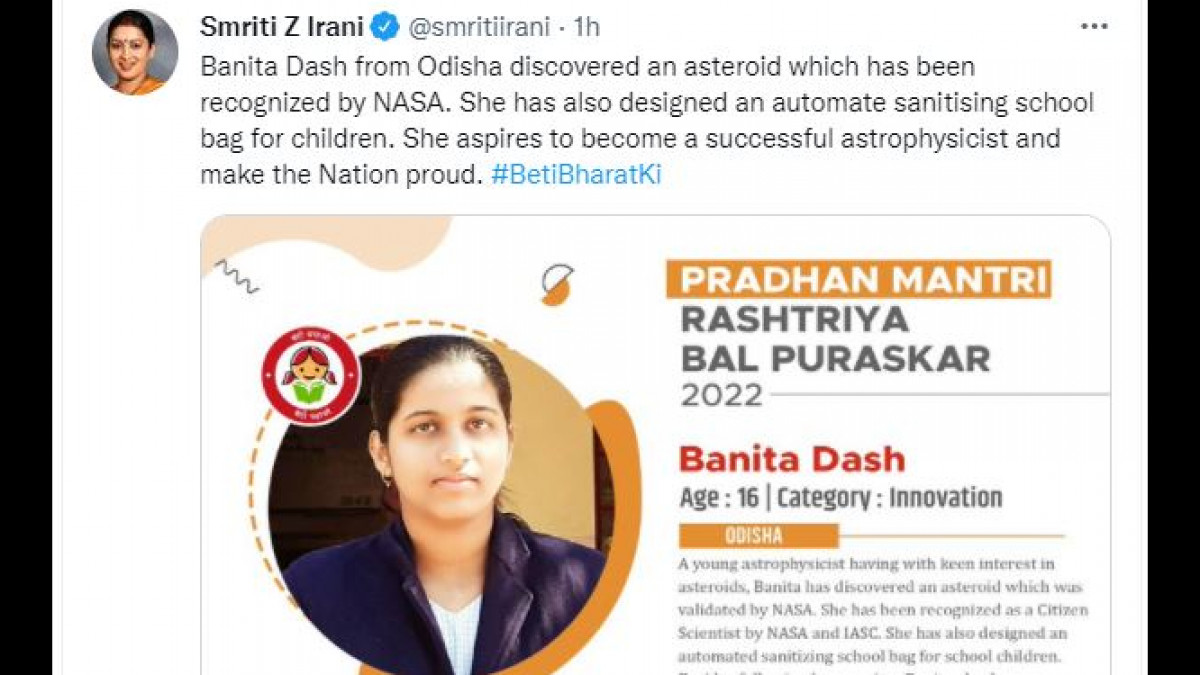 As many as 29 children (15 boys and 14 girls from 21 states and UTs) have been conferred the Pradhan Mantri Rashtriya Bal Puraskar this year, selected from all regions of the country for their exceptional achievements in Innovation (7), Social Service (4), Scholastic (1), Sports (8), Art & Culture (6) and Bravery (3) categories.

In order to felicitate and motivate the exceptional works of children, a function was held virtually on the occasion of National Girl Child Day on Monday and also as part of Azadi Ka Amrit Mahotsav. The Awardees of PMRBP 2021 and 2022 along with their parents and concerned Collector joined the event (virtually) from their District Head Quarters.

The cash prize of Rs 1,00,000 was given to the awardees of PMRBP 2022 which was transferred online to the accounts of the winners during the programme by Prime Minister Narendra Modi.

Speaking on the occasion, PM Modi said, "National Girl Child Day is an occasion to reiterate our commitment and further strengthen ongoing efforts to empower the girl child. It is also a day to celebrate the exemplary accomplishments of the girl child in different fields. In every development initiative undertaken by our Government, we accord immense priority to empowering the girl child and strengthening our Nari Shakti. Our focus is on ensuring dignity as well as opportunities to the girl child."