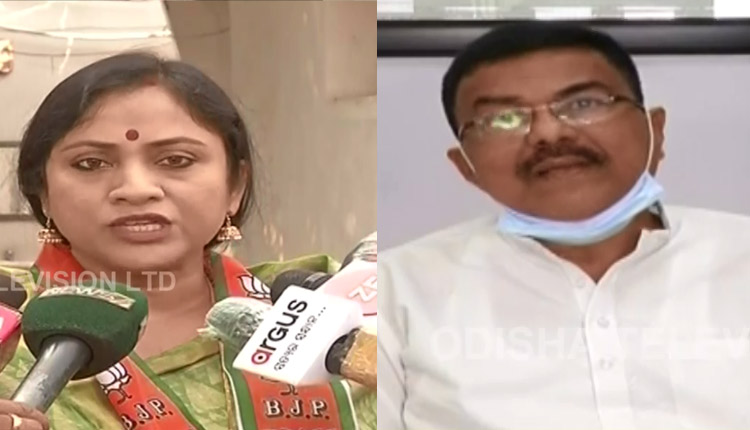 Bhubaneswar: Odisha State BJP spokesperson Lekhashree Samantasinghar on Wednesday slammed BJD leader Arup Patnaik for his ‘Kalapahada’s sister’ jibe at her, a day after she courted a controversy for making some statements on Puri.

“BJD has no issue for development and they want to divert the attention of the public by insulting others. Those who are labelling me as the sister of ‘Kalapahada’, should realise that they are themselves like the Muslim General of erstwhile Bengal under the Karrani Dynasty, who attacked to destroy the Puri Jagannath Temple with his army several times centuries ago,” she said.

“What has BJD done for Odisha in the last 20 years? They have failed to make Puri world famous and the town has seen no discernible development during the tenure. But when BJP asks such uncomfortable questions, it is hurting the ruling party,” added Samantasinghar.

It is worth mentioning that, Lekhashree’s alleged statement on Puri had snowballed into a controversy, drawing criticisms from several political parties.

Addressing party workers at an event, Lekhashree had reportedly stated that people used to think Puri was in Kolkata, but they came to know about the town being in Odisha only after party leader Sambit Patra contested from the seat in the 2019 Lok Sabha elections.

Soon after a video clip of her speech went viral on social media, leaders from various political parties trained guns at her over the statement.

Soon after the development, BJD leader Arup Patnaik termed Lekhashree as the sister of ‘Kalapahada’.

“As a resident of Puri I am deeply hurt by her irresponsible statement. It reflects ego, idiocy and madness. I don’t think BJP will support her for this kind of reckless statement,” Arup spoke before mediapersons.

On the other hand, the BJD on Wednesday came down hard on Lekhashree for defending her statements on Puri.

Speaking to reporters in this connection, State Govt Chief Whip, Pramila Mallick said that instead of seeking apologies for making disgraceful comments on the pride of our State, Lekhashree should stop making useless resistance.