Poacher Who Killed Over 20 Elephants In Odisha Arrested 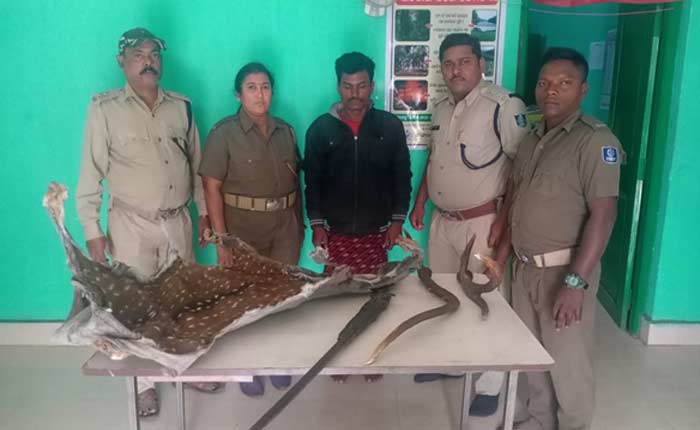 Cuttack: Officials of Cuttack Forest Division on Sunday arrested a notorious elephant poacher, Babuli Mahalik (45) for his alleged involvement in hunting of over 20 elephants in Athagarh Forest Division of the district.

Acting on a tip-off, a special squad of forest officials led by Athagarh Divisional Forest Officer (DFO) Sasmita Lenka, raided the house of Mahalik at Durgaprasad village under in Narsinghpur area of the district and arrested him.

Upon interrogation, Mahalik confessed that he along with his two associates poached two tuskers in Athagarh division under Maniabandha section of the district on 20 February in 2018 and sold the tusks in Nayagarh area.

Mahalik informed that he charges around Rs 30,000 for shooting down an elephant and revealed that he has killed over 20 elephants so far. The forest officials also seized deer skins, antlers and a country-made gun from his possession.

“Babuli is a habitual poacher of Narsinghpur area. He has shot down more than 20 tuskers till date and smuggled tusks to several places. During interrogation, he confessed to have killed two elephants and smuggled their tusks in February in 2018. The case was handed over to Crime Branch after the forest department failed to make any arrests in connection with the case,” informed the DFO.

“After being tipped off regarding his plans to hunt another elephant, we picked him up from his house,” added Lenka.

Based on the inputs of Mahalik about selling the tusks of elephants in Nayagarh area, Lenka said that Nayagarh DFO has been intimated about the matter and investigation will be initiated in this regard soon.

On Saturday, two persons were arrested by the forest department officials for their alleged involvement in elephant poaching case in Sonepur in 2019. The accused have been identified as Suresh Karna and Kalia Karna of Meghanand village of the district. Two tusks weighing nearly 3 kg each were also recovered from their possession.